Deborah: A Case Against Complementarianism? 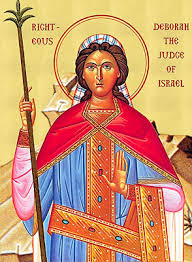 Complementarianism is the view of gender roles which teaches that men and women, while equal in dignity and honor, being created equally in the image of God, have differing, complementary roles in the created order to bring about God’s ordained purposes. The difference between man and woman is not merely a matter of biology, but is rooted in the good creation which God made to display his glory. It was not good for man to be alone. Because God is good his creation must be as well, so God made woman and together man and woman were good.

On the other side is the egalitarian view which says that there is basically no role distinction between men and women.[i]

Opponents of Complementarianism are many, especially in western and some far-eastern cultures. And one of the cases often brought against the Complementarian position that only men can be pastors/elders in the church has to do with Deborah, the woman judge of Israel found in Judges 4-5. The argument is made that if Deborah could be a judge then surely God has no problem with a women exercising proper authority over a man.

The most common response I have heard to this argument from the Complementarian camp is that the time of the judges was an extraordinary time when Israel was practically leaderless and often straying, therefore Deborah is seen as a sort of exception and even an indictment of the men who were failing to lead.

I think the answer is much simpler than that.

I am not ruling out this answer as a possibility, but it does seem a little complicated, making assumptions, just like the assumptions that are often made regarding the quintessential Complementarian text, 1 Timothy 2:12-14[ii]. The answer to the Deborah question, in my point of view is because on the one hand God appointed Deborah as a judge over Israel and on the other hand has determined that men should be the ones exercising authority in the church, we simply see that the role of judge must not be analogues to the role of elder. It is really that simple. In fact, we see in 1 Timothy 3[iii] that the role of elder is likened to the role of a father in a house. This is a much closer analogy, which are shoes Deborah could never have filled. The leadership structure in the church is related to the good, created order which God originally set for the family, one that has a father as the leader. It should be noted at this point that without women the picture is incomplete, but men are still called to lead.

If such reason is not enough to deter the Deborah “clause”, then we need only to look to the male judge, Samson. He is found is Judges 13-16 and a brief comparison of his life to the qualification of a church elder in 1 Timothy 3 quickly shows that Samson was never qualified to be an elder, therefore confirming even more that the role of elder is not analogues to the role of judge. Women could be judges. Many women are blessed with tremendous leadership gifts that they should be encouraged to use to build up the body of Christ and bless society – but just not as elders in the church.

This can be hard for us to grasp, and it can even be abused, but as people of God we want to see that the way he made things to be is good, just as he is good. And if we can trust him in that we will experience the joy of seeing him glorified as men and women, complementing one another, work to see his kingdom come and his will be done on earth as it is in heaven.

[i] There are varying degrees of this argument

[ii] The argument is made by many that this text is speaking only to a certain situation unique to the church in Ephesus that Paul is addressing. This is pure conjecture and is not a plain reading of the text which roots the argument not in the current situation but in the events of creation and fall in Gen. 1-3

[iii] Therefore an overseer must be above reproach, the husband of one wife, sober-minded, self-controlled, respectable, hospitable, able to teach, not a drunkard, not violent but gentle, not quarrelsome, not a lover of money. He must manage his own household well, with all dignity keeping his children submissive, for if someone does not know how to manage his own household, how will he care for God’s church? He must not be a recent convert, or he may become puffed up with conceit and fall into the condemnation of the devil. Moreover, he must be well thought of by outsiders, so that he may not fall into disgrace, into a snare of the devil. (1 Timothy 3:2-7 ESV)

Reconciled to God through the , atoning work of Jesus Christ on the cross; I am not my own. A blessed father of five kids and privileged husband to Katie. I live in the UAE where I am the pastor of Immanuel Church of Fujairah. I am originally from Texas and am currently a distance student at The Southern Baptist Theological Seminary.